When I arrived in Quebec April 24th, it was a bit of a shock. The street signs, shop names, detour signs, menus, you name it, were all in French. It was surreal to cross a single border, walk two miles, and be transported to a French world. My foreign language skills are limited to basic “restaurant Spanish.” I can communicate enough to get by with a Hispanic cook (and throw a few Spanish swear words their way when necessary), but the French language is well beyond my skill set.

I did figure out the directional words nord, sud, est, and finally, ouest, as I walked due nord to Montreal (though a kindergartener probably would have mastered those as quickly as me).

Ouest, of course, was my favorite. Not only because there is always something magical about traveling west, but because of the word’s resemblance to quest. After all, I am in the middle of a quest to the ouest, always searching for new adventures, new people, new inspiration, and continued growth. 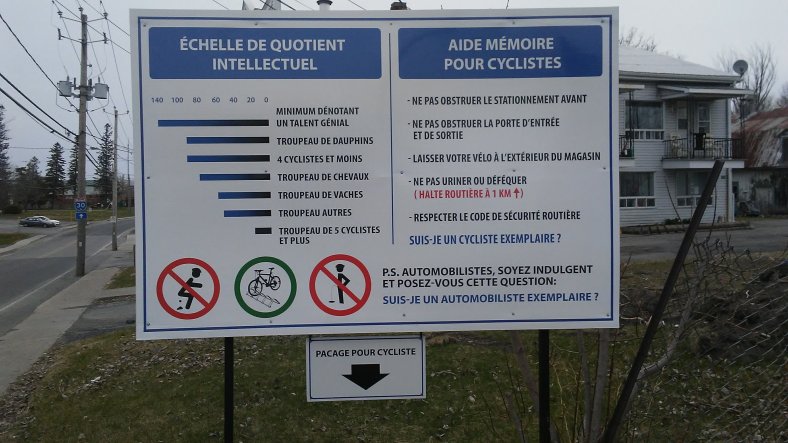 Rules of the path. No number 1’s, no number 2’s, and always park at a bike rack. I understood that much.

Montreal was a very eclectic and enjoyable European-feeling city, but I was ready to get out back into wide open spaces after my two-night hostel stay on Rue de Bishop.

After walking due north into Montreal, I took a hard left and started walking west again, with my sights set on Ottawa, some 115 miles away.

I didn’t appreciate the size of Montreal Island until I spent an entire day walking from downtown back onto the “mainland.” It was a beautiful stroll, first through colorful neighborhoods, then onto a series of bike paths that followed the St. Lawrence River through affluent suburbs, past mansion after mansion. More and more people stopped to chat with me as I got further from the center of Montreal. An older gentleman named Richard (went by Dick) Clark gave me a crisp Canadian five dollar bill. Dick Clark gave me five bucks!

Another middle aged fellow who stopped me simply said “It gets more English the further west you go, and more people will talk to you.” I hoped so. After all, I only had a three week, well trimmed beard going. I didn’t think I looked too threatening!

After a 25 mile stroll I was off the island and closer to my second province, Ontario.

A substantial morning shower the day after leaving Montreal left me soaked, but afternoon sun and comfortable temperatures (and some incredible cloud formations) greeted me at the provincial border.

Storms clouds to the south and east of Highway 10 near St. Eugene, Ontario, over a massive cornfield. These storms missed me!

I expected the area between Montreal and Ottawa to be a little more populated. I clearly didn’t look too closely at my map. One of the counties I walked through had a whopping population of 12,000. It was mostly farmland.

In St. Eugene, I picked up the Prescott-Russell Rail Trail, which took me 60 miles west to the outskirts of Ottawa.

I didn’t have many human interactions on the trail. Temperatures cooled back into the 40’s and more rain showers moved through the region. People were few and far between.

I passed the long, quiet hours getting lost in the landscape. Tranquil hayfields, cornfields, and dairy farms gave way to forests and wetlands. I saw a number of blue herons, orioles, and even a few beavers. There were a few turkeys to gobble at, plenty of cows to moo at, and flocks of Canadian geese to honk at. I camped around the trail for two nights, lulled to sleep by endless bird chirps.

The donkeys had an interest in my walk. The goats…not so much.

The skies were sunnier when I approached Ottawa, and more people were on the trail. About ten miles from town, a woman named Helen was out walking her dog, Bodhi. She stopped me and we chatted for a bit. I was almost out of clean socks and desperately needed to do laundry, so she invited me over to her house for lunch and laundry.

I walked to her home in an eastern suburb. Helen had a plate of hot chocolate chip cookies waiting for me.

I was able to launder my damp, dirty clothes and air out my tent, which was throughly soaked by a heavy storm the previous night. Helen even treated me to lunch at a delicious Meditteranean restaurant. Considering she is an aspiring minimalist, avid traveler, and cyclist, we had plenty to talk about!

My first friends in Ottawa! Helen and her pooch, Bodhi. Bodhi was a street dog on the Turks and Caicos Caribbean islands before Helen rescued her. Lucky dog, I would say!

It was certainly creepy showering and wandering this floor without a soul around!

I spent this afternoon walking around the Canadian capital city and enjoying the beautiful architecture of their Parliamentary buildings. The downtown area is high on a bluff above the Ottawa River. It is quite beautiful!

I had to snap a selfie with the Ottawa River and some important Parliament buildings in the background .

My walk takes me back out into the country tomorrow. I’ll be heading back into Quebec, across the Ottawa River, for a few days before my long awaited meet-up with the Trans-Canada Highway. I’m not sure when or where my next rest day will be. The road Gods and Mother Nature will dictate that. 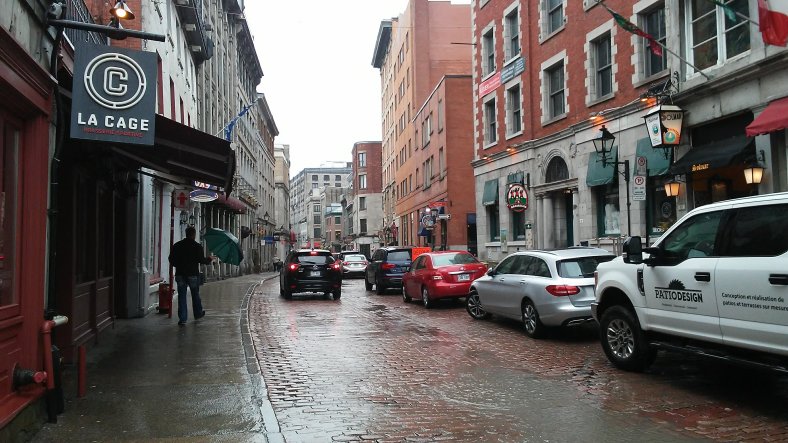 The streets of Old Montreal. 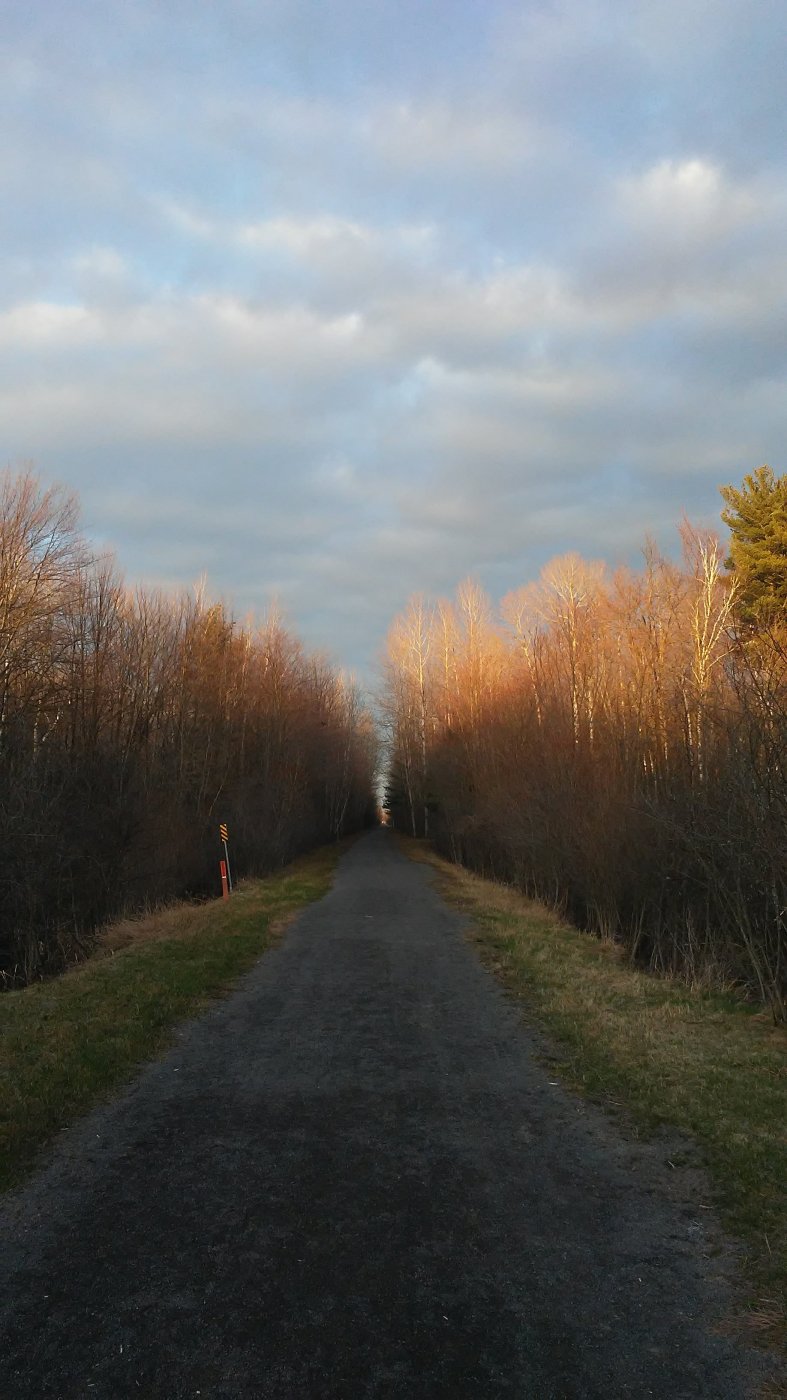 Nearing the end of the Prescott-Russell Rail Trail at dusk.

The streets of Ottawa next to one of the Parliamentary buildings.

I hope everyone is able to get out, walk, and enjoy the springtime sunshine! Walk on!

5 thoughts on “Ouest We Go”