Many North Dakota license plates say “Discover the Spirit,” above an image of rolling plains, distant hills, and a buffalo. I have yet to see a buffalo, but I have been discovering that spirit for the last nine days and 251 miles while walking from Michigan to Ray. It has been a wild, loud, and often frustrating (but beautiful) spirit that has provided a significant mental challenge as I push further west. 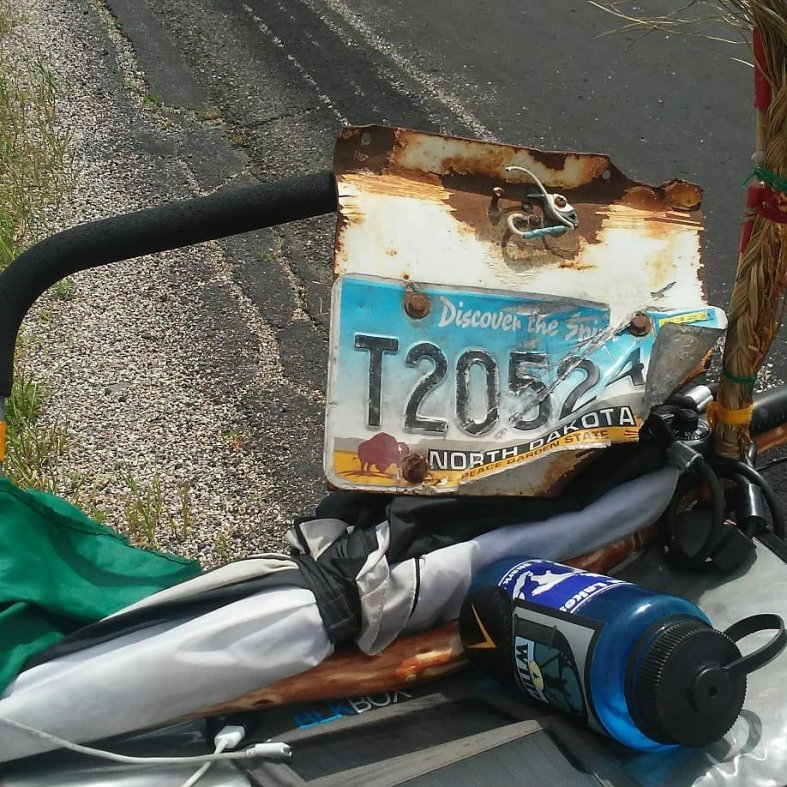 The majority of the scenery between Michigan and Minot consists of endless soybean, corn, and canola fields on pancake-flat plains. Devil’s Lake, along with numerous ponds and wetlands, did provide something different to look at along the way.

One of the “arms” of Devil’s Lake in the late afternoon.

Highway 2 and the wind managed to get under my skin during the first few days out of Michigan. The eastbound shoulder (which I walk, facing traffic) was paved for the first 30 miles of North Dakota, then the paved portion inexpicably stopped for miles and miles. A gravel and rock shoulder replaced it (much like the shoulder of my old Canadian walking partner, the Can-Can). However, the shoulder on the westbound lanes of the highway was paved 99 percent of the time. It was more like 50 percent on my side of the road. “Why does that side of the road get the best shoulder,” I continually whined. The howling wind, monotonous scenery, and maddening shoulder fed my “walker’s rage.” At one point I cursed the entire state of North Dakota. And then alologized to the whole state a minute later when I realized how ridiculous I was being. I had such great shoulders for the previous 450 miles of my walk, I unreasonably expected them to continue. When they didn’t I took it out on an entire state! At least I realized the errors in my thought process. The 50/50 bumpy shoulder lasted for 120 miles (the shoulder has been great since Minot though).

On the six-day walk to Minot I camped behind a gas station, at an RV Park in Leeds (thanks for the spot, Jan!), and at three city parks in Rugby (the Geographical Center of North America), Towner (the cattle capital of North Dakota), and Surrey. I will admit I thought camping in these small towns would be quieter. But North Dakotans love their fireworks! I heard my first few fireworks on July 1st in Michigan, and continued to hear them every night until July 8th. They celebrate Independence Day for eight days in North Dakota!

I had a short, six mile walk into Minot after leaving the city park in Surrey. For the first time since leaving the Atlantic, the mercury cracked the 90 degree mark, which is pretty remarkable considering it was July 6th. I spent a little time wandering through the North Dakota State Fairgrounds and downtown. Minot had a nice “Western feel” and I enjoyed my walk through town, but I was exhausted from the heat and was ready to shut it down for the day. I ended up at Roughrider Campground on the west end of the city.

The kind woman working the cash register gave me two complimentary tokens for the pay showers. Initially she only handed me one taken. She must have caught a healthy whiff of my U.S. 2 highway stench and thought “a five minute shower isn’t enough for this guy. Better make it 10.” I gladly accepted the second token when she handed it to me. I surely needed it!

Downtown Minot. I will need to saddle up for the hot, windy, and desolate West!

The landscape began changing west of Minot. The city itself sits in the Souris River Valley. Bluffs with sparse pine trees and shrubs line the river. I enjoyed seeing, and walking, some hills. My walk has been nearly flat since leaving the shores of Lake Superior.

As I approached Stanley over the next two days, I walked past fewer farms and through more ranchland. I did some serious mooing at cattle when I passed the first few herds grazing in their pastures right off the highway. I was still in rural country, just a different kind of rural.

I had also arrived in the oil rich Bakken Region. Oil wells blend right into the modest grassy hills of the area. Locals have told me that traffic is nothing like it was during the “oil boom” five years ago. Still, I have experienced a significant increase in vehicles as I have walked further west into the state. Maintenance trucks for the oil wells, which are typically half-ton pickups, can be just as loud as semis. I have “gone silent,” (my term for putting in earplugs) to lessen the impact of road noise on my ears.

An oil well just west of Stanley. Oil operations are becoming more common as I get closer to Williston. I will be in the Bakken for another 100 miles west of Ray.

I reached out to the Blaisdell/Stanley RV Park when I left the Minot area and was able to set up a free place to sleep for the night in the park’s “cabana.” I walked 36 miles from the Roughrider Campground to the park. Lisa, the owner, was incredibly helpful. I had a roof over my head for the first time in North Dakota. I slept in the cabana hallway on my sleeping pad and had access to free laundry, a shower, a fully operational kitchen (though I didn’t cook), and a few couches. 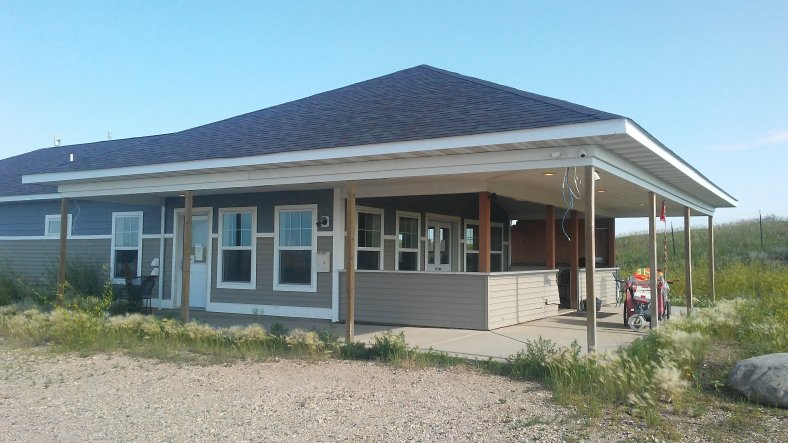 The cabana at Blaidsell/Stanley RV Park. The park was a bit rugged (typically used by oil and contract workers), but the cabana felt like a Holiday Inn to me! Thank you for the spot, Lisa!

I had a short 15 mile walk into Stanley the following day, where I camped at yet another city park. Locals suggested trying a “whirly-whip,” (not to be confused with a whippit, which is very different!) at Stanley Drug. Employees use an old-school ice cream mixing machine to prepare the whirly-whip. The old fountain was a happening place on the hot afternoon. I bellied up to the soda fountain bar and ordered a peanut butter and vanilla whip. It was just what the doctor ordered on a hot afternoon!

After a calm few days storm wise, I had a rough two nights in Stanley and Ray. Between passing trains twice an hour (the tracks were about 30 yards from my tent) and a strong storm that pushed through town in Stanley, it was a restless night. 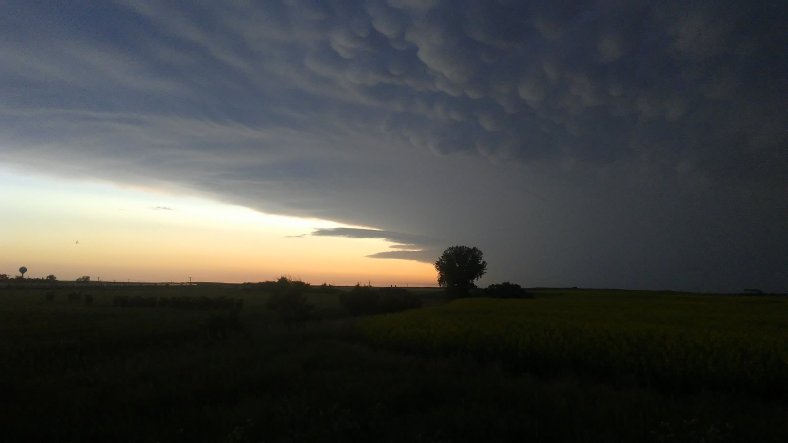 Encountering severe weather has been a consistent issue on the plains of Western Minnesota and all of North Dakota. This was the view to the west from the Stanley water tower. This particular cell produced a tornado in Watford City (65 miles southwest of Stanley).

I arrived in Ray on July 10th after a 36 mile walk and set up camp as distant thunderstorms closed in on the town. Right as I was getting ready to go to sleep, my phone notified me of a severe thunderstorm warning. I put on my shoes and jogged into town (PJ was safely tied to a bench under a gazebo) as the storm blew in. I waited the storm out at a welding shop. A man named Joey happened to be working late and invited me in when he saw me running by. By the time the storm passed and I was back in my tent, it was 12:30. I woke at 8 this morning and decided to take a day off. Williston would have to wait!

Proof that North Dakota is not entirely flat!

Much of the scenery in North Dakota is incredibly serene and idyllic. Minutes later, maddening winds, truck noise, and a bumpy shoulder are there to greet me. It has been a roller coaster walk!

I spent the 4th of July at the Geographic Center of North America in Rugby. I loved seeing the American, Canadian, and Mexican flags blowing together in the North Dakotan breeze.

The “Peace Garden State” hasn’t always been peaceful thanks to trains, trucks, fireworks, relentless wind, and bumpy shoulders. I am constantly reminded to be patient, persistent, and to avoid having expectations for what I’ll face in coming days. Just because I have a smooth shoulder today doesn’t guarantee a smooth shoulder tomorrow!

I am 54 miles from the Montana border. I am sure North Dakota has a few more loud surprises in store before I reach Big Sky Country.

One thought on “The “Peace” Garden State”