Washington was a grind. The seven day, 187 mile trek through the Evergreen State gave me all I could handle!

I left Tekoa on August 19th with my sights set on an RV Park in Steptoe. Considering the previous two weeks (with the exception of one clear day between Missoula and the Idaho border), smoke in the air was my new normal. I followed two roads to get to Steptoe – State Highway 27, and Hume Road. Both peacefully meandered through mostly harvested grain and lentil fields. The parched rolling hills had a yellowish-brown color that nearly matched the hazy skies.

Thanks to light Sunday traffic, the shoulderless roads were quiet and quite enjoyable to walk. I picked up consistent cell service for the first time since the Montana-Idaho border, and arrived at my campground just in time to participate in a fantasy football draft.

My neighbor, a chatty 10 year-old boy named Devin, was very interested in my walk and provided some company for the evening. He offered suggestions for ways I could get across the country faster. My favorite – strap a sail to PJ and ride on top when the wind was at our back.

As I went to sleep, thicker smoke blew in from the northwest. By morning, air quality readings were wavering between unhealthy and very unhealthy levels (they had mainly been moderately unhealthy up to that point). I decided I would continue walking. After all, I’d still be breathing in the smoke if I just sat in my tent. I figured my body would tell me if it couldn’t handle the air.

The walk into Colfax went off without a hitch, and I continued west from there to a little town called Dusty. Route 26 west of Colfax was named the “Pelouse Scenic Highway.” I renamed it the “Pelouse Smoky Highway.” The 17 mile walk to Dusty was surreal. I couldn’t see much on the other side of the grain fields that surrounded me. I felt like I had been dropped on some strange, polluted, alien planet, left to fend for myself.

Dusty only added to the strange day. It might as well have been a ghost town. The lone surviving business was a gas station, which had been closed for two hours by the time I arrived at 7 PM. There wasn’t a soul around. I decided to sleep behind a rock mound at a rest area outside of town. While I waited for the sun to set, I sat on some impeccably manicured grass next to a cemetery. The sun was a fiery red as it dipped lower on the horizon.

Thanks to considerably clearer skies the following morning, I had a little pep in my step. My target destination for the day was Washtucna, 35 miles down the road. Locals warned me of heavy harvest and college traffic on the highway. To my pleasant surprise, traffic was light. I enjoyed the scenery throughout the day. I left “Pelouse Country” late in the morning and walked into the “Scablands,” which are unique scab-looking rock formations on the hillsides, only found in this part of Washington.

The hills have scabs!

About 10 miles from Washtucna, I reached another big milestone on my walk – the 3,000 mile mark. I stopped and sat on a gravel pulloff to take in the moment. As I was preparing to resume my trek, a passing motorcyclist named Ken stopped to see if I needed help. We ended up visiting for 45 minutes.

I didn’t know it at the time, but Ken would play a huge roll in my walk in coming days. He surprised me with bananas and 12 pouches of tuna the next morning in Washtucna, put me up in a hotel in Kennewick, and set up my camping spot in Umatilla. Ken has taken several cross-country motorcycle trips on 20 dollars by relying on the kindness of strangers to help him out. Clearly, he pays it forward when he gets the chance. Thank you Ken!

After an overnight stay at a city park in Washtucna, and the pleasant morning visit from Ken while I was drinking coffee at a little cafe, I walked 14 miles south to Kahlotus. Despite the wonderful morning, I was exhausted and didn’t have any more miles in my feet. I think the string of 90 degree days, smoky air, and desolate areas finally caught up with me. I got permission to camp at a park in town and turned in early, hopeful for a better walk the following day.

Pumping the brakes a bit and resting payed off big time. I covered 36 miles in 12 hours and ended in the peaceful sounding town of Eltopia. Despite a great day of walking, I had no idea where I was going to sleep. I eventually walked down to the railroad tracks next to the abandoned downtown strip and began searching for a clearing in the sagebrush that provided the lowest probability of an encounter with a rattlesnake.

I came across a woman named Shea who was searching for her weiner dog that wandered off. I helped her look as I explained my dilemna. She said I could sleep next to an abandoned school she lived next to, as long as I didn’t start a fire or mind ghosts. She later told me about paranormal encounters she has had since she moved into an RV next door (mainly unexplained noises and footsteps on her RV roof). Shea gave me a tour of the school grounds. The 84 year-old building had seen better days and was very creepy, but sleeping next to it was my best option.

“I’ll just be here for the night, ghosts,” I said while I set my tent up. “I mean you no harm!” It turned out to be a pleasant night!

School has been out in Eltopia for some time.

I rolled out of my tent in the morning and couldn’t believe my eyes. Clear blue skies! I packed up quickly and started my walk to the Tri-Cities. Originally, I planned on avoiding the area (bigger cities tend to be a fustercluck to walk through). But once I discovered I could walk the Interstate on the Oregon side of the Columbia River, I rethought my route plans. The presence of more services and several long stretches of paved bike paths through the Columbia River Gorge, plus the walkability of an interstate, made it a no brainer to cross into Oregon due south of the Tri-Cities.

What was supposed to be a breezy 24 mile day turned into a 32 mile adventure. A flat tire six miles in set me back about an hour, and once I neared the outskirts of Pasco, Google’s directions sent me to a private railroad crossing with no trespassing signs posted all over the place. I had to turn around and ended up back at the same spot where I left the highway two hours earlier.

Once I was finally on the right roads, I hustled to Kennewick, where my motorcycle buddy Ken set me up with a hotel room for the night. It was amazing to have a comfortable bed, shower, and a McDonald’s next door after an eventful day.

The highlight of walking through the Tri-Cities was crossing the Columbia River between Pasco and Kennewick on the Ed Hedner Bridge. I didn’t expect the river to be so big!

I began my final stretch in Washington the following morning. I followed Bofer Canyon Road out of Kennewick before being forced onto the interstate. A dead end sign at the Coffin Road exit left me with no choice but to illegally walk the interstate for eight miles. I walked 15 minute miles to get to the next exit in two hours. Either passing cars didn’t call the highway patrol on me, or I walked fast enough to get off the freeway before authorities could catch up with me!

Bofer Canyon just south of Kennewick. Some big hills and 30 mile per hour head winds made for a challenging stretch out of the canyon bottom. I also met two cyclists named Leslie and Chris, who were out biking into the wind. They gave me some encouraging words that helped immensely!

After getting off the interstate I had a short three mile jaunt across the Columbia River (again) on a freeway adjacent bike path into the final state of my journey – Oregon!

I camped at a riverside RV Park in Umatilla on my first night in the Beaver State.

My first two days in Oregon have been pretty quiet, aside from the constant flow of traffic on Interstate 84. I camped at the city marina in Boardman last night and am staying at an Army Corps of Engineers campground tonight in Three Mile Canyon. My site is a stones toss from the Columbia River. With beautiful blue skies overhead, I decided to cut today short at 14 miles and enjoy the peaceful Oregon desert and riverside accomodations.

Favorite Roadside Find – As I was chatting with my sister on the phone outside of Washtucna, a woman pulled over and gave me a tin of cinnamon rolls and four muffins. Hands down the sweetest thing I’ve been gifted on the roadside! 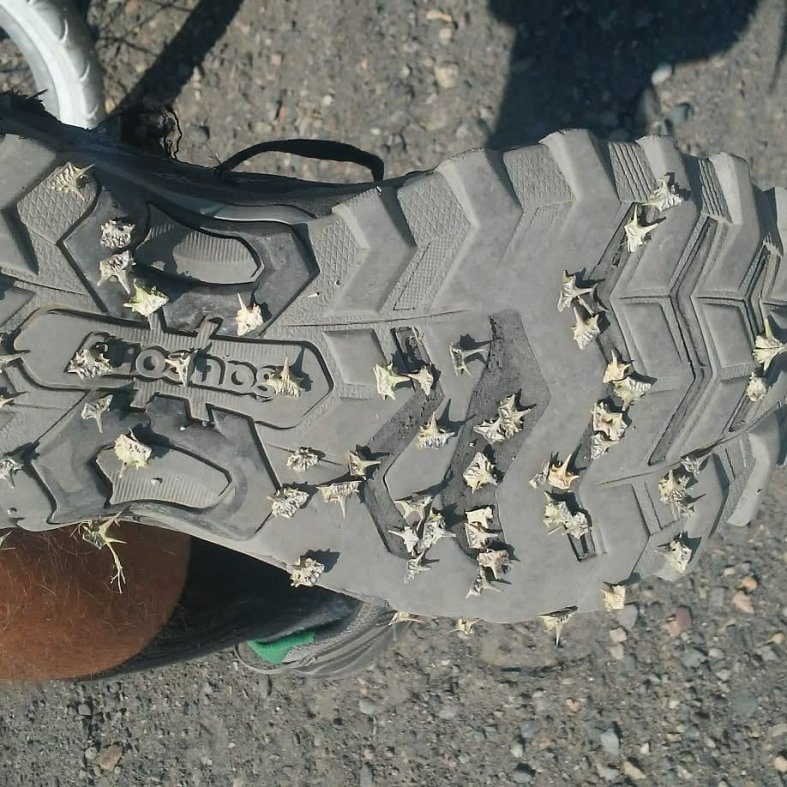 “Goat’s Heads” have become my biggest nemesis in Washington and Oregon. They are EVERYWHERE…Even on nicely paved shoulders. They have caised one flat tire for PJ, and countless holes in my tire tubes. Fortunately, the self-sealing tubes are holding up pretty well when I simply reinflate the tires after a puncture.

I have been craving a quiet campground on a blue sky day in the middle of nowhere for weeks now. Three Mile Canyon provided the perfect spot! It will mean an early start and 43 mile day to Rufus, but should be worth it!

It was nearly dark when I crossed into Oregon, and this happened to be the first “Oregon themed sign” I passed after I left Umatilla. It will have to do for my “Welcome to Oregon” moment! I’m crossing my fingers for a safe walk to the coast.

From Three Mile Canyon, I am about 170 miles from downtown Portland. Seaside, my eventual destination, is about 90 miles west of that. I will primarily be on the interstate until The Dalles. From there, I’ll be able to follow some bike paths, frontage roads, and Old Highway 30 for stretches to get a break from I-84.

I am excited to start my push to Portland in the morning! Walk on!

5 thoughts on “The Oregon Trail”