I left Sudbury, Ontario on May 16th and finally had my sights set on Sault Ste. Marie, the first big “Milestone City” of my walk. The Soo was just under 900 miles from my starting point, and is roughly one-fifth of the way between the Atlantic and Pacific Oceans on my chosen route.

I came out of Sudbury walking hard. I was reenergized by a restful day-and-a-half break. The Morin’s revolving refridgerator door gave me plenty of fuel for the first three days of the seven day trek. I walked 90 miles in three days, camping next to “Jeremy’s Truck Stop” in Nairn Centre, then out in the woods for two nights before approaching Blind River.

On the walk out of Sudbury, I passed the Sudbury Smokestack, the second tallest structure in Canada (the first is the CN Tower in Toronto). The smokestack, built in 1972, is tall enough to get mining emissions into prevailing winds and out of Sudbury’s immediate atmosphere, into less polluted air. Construction occurred at a time when the city needed to take drastic measures to clear the air.

Near the end of my third day out of Sudbury, I met the Regional Chief of the Ontario First Nations. We had an incredible roadside talk about Native History, famous First Nation walkers, and society’s shift away from walking as a mode of transportation. As a touching gesture, Isadore gave me a wool blanket, which I used during the next few chilly nights.

I expected to maintain my 30 mile per day pace when I started my walk to Blind River, but I simply hit a wall. I walked about ten miles, got into town, and heeded my body’s advice, which was telling me to slow down. I went to Tim Horton’s for a cup of coffee and was immediately greeted by Fern and Kathleen McCoy. “We are the REAL McCoys,” Fern insisted after introducing himself. The couple invited me to stay with them for the night. “You were looking pretty tired when you walked up,” Kathleen told me. I agreed without a seconds hesitation.

I stayed in the guest bedroom/art studio at the McCoy house. Fern, who was in the middle of a food fast, sat at the dinner table and visited while Kathleen and I enjoyed homemade spaghetti and coffee. The couple (who were big hitchhikers and traveling musicians in the late 70’s) continually host travelers passing through town. They have hosted cyclists, hitchhikers, people down on their luck, and now, a walker. And considering they have seven children (five of which are boys), they knew exactly how to host a hungry and exhausted walker!

Fern and Kathleen outside their vibrant home. Fern’s father built the house 70 years ago.

It is always amazing what a good night of rest, some incredible company, and a massive portion of spaghetti can do! I ended the day after leaving Blind River 30 miles west near Thessalon and slept next to an old service road. Without any bugs (yet), I didn’t even bother setting up my tent. I slept like a baby under the warmth of my new wool blanket and a starry sky.

I came very close to the North Channel of Lake Huron twice between Thessalon and Bruce Mines. Overnight lows around freezing and cool morning temps have left me starting most days with my beenie and high-visibility down jacket!

On my sixth day out of Sudbury, I decided to give it my all in an effort to get as close to the Soos as possible. At about six in the evening, I left the Can-Can and followed a few country roads for the rest of the day. The walk led me through farm and ranchland.

There are many Amish families in the area. I was passed by a few Amish carriages on the highway. Off the Trans Can, I saw a few men out in their fields with horse drawn plows. Another was walking his fields, checking on his cows and calves. Amish homes were pretty easy to spot; no cars were parked outside and there weren’t electrical lines running to the houses. Their well kept homesteads typically had a long strand of clothes hanging from clotheslines stretching from the house to a tree in the yard. Signs advertising beautiful hand-built sheds (which were on display next to the road) led me to marvel at their independence from modern technology and the many luxuries people take for granted.

Only a few cars passed me during that four hour span. It was a beautiful evening and I enjoyed the peaceful, easy feeling of the countryside. For that four hours I was able to forget about everything and simply get lost in the moment. I walked until the sun dissapeared behind the bluffs surrounding Sault Ste. Marie.

One of the Amish homesteads, complete with pristinely cut and organanized wood piles.

Aftera 36 mile trek the day before, Sault Ste. Marie was a mere 17 miles away. I was in town by noon.

I was thrilled to arrive in the Soo! The next challenge for me was crossing the International Bridge (over which walking is illegal) where I could pick up a care package my folks had mailed to me, care of general delivery, at the post office. I also needed to mail some items home, which was significantly cheaper from the U.S.

My best option was to take the Bridge Bus, which conveniantly operates on the hour from 7 AM to 7 PM. I evenutally found the stop downtown. When the driver pulled up, he looked at PJ and I and just shook his head, looking down at the bus floor.

“Any chance we can hop on?” I asked the driver. He didn’t look too happy.

“Can you get him up the bus stairs?” He asked. I looked at the stairs, looked at PJ, and looked at the driver, shaking my head no. “Let me pull over up here,” he grumbled. The driver pulled into a parking spot up ahead so other buses could load and unload.

I introduced myself to the driver, Mike, and explained my predicament. “You have walked from where?” I told him my starting date, how many miles I had walked, and my plan for the next few days. He quickly became cordial and quite helpful. Mike lowered an electric wheelchair lift, which PJ perfectly fit on, and raised him up. I carefully pulled PJ onto the bus and held on tightly as we cruised over the St. Mary’s River into Michigan. We cleared customs with no problem!

I spent the afternoon walking errands…I stopped by a shipping store and mailed Forest (my backpack who has been my domestic and international travel companion for 10 years) home in an effort to have more room inside PJ for other pertinent items. Forest was with me for the entire walk in 2015, so it was bittersweet parting with him. I did keep the detachable top of the pack with me so a piece of Forest will still play an integral roll in my journey. Later on that afternoon I purchased a small camelback to carry. In honor of Forest, the pack is green, just like him. I named him Little Forest.

I have spent two nights camping at the Soo Locks Campground in the Michigan Soo, resting, enjoying the locks, and taking in other points of interest in this charming city. 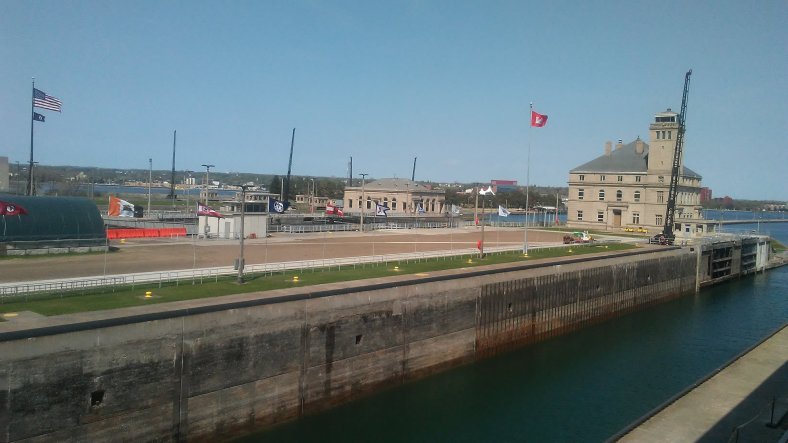 The Soo Locks are a must-see engineering feat in Sault Ste. Marie!

My rest day in the Soo has also allowed ample time to prepare for the next leg of my journey, which incudes a BIG route change. I cannot walk across the International Bridge, which I knew about when I chose my route. Initially I thought I would be ok with skipping those three miles. Ultimately, the driving desire to “connect all my steps” will take me back into Canada and I will return to the Trans Canada Highway to walk around Lake Superior. The Can-Can will lead me along the hilly coast of Lake Superior’s Eastern and Northern Shores, and through plenty of “Bush,” as the locals say, before passing through Thunder Bay, where I will head south into Minnesota. The route will add about 190 miles to my walk, sounds physically demanding, desolate (there is a 100 mile stretch with no towns or services), and more adventurous than the alternative. I am all in!

Roadside Change – $4.41 I found a loonie this week, which is a Canadian dollar coin. It has a loon on one side, hence the nickname!

Favorite Roadside Find – Not necessarily a “find” per se, but the wool blanket given to me by Chief Isadore was hands down the best thing I have acquired on the roadside during my walks! What a touching gesture!

My scenic country road walk approaching the Soo was foal of entertainment and serenity. On a side note, I clearly have plenty of time to create punomimal puns while I walk.

I have retired my first pair of shoes on the trip. The white Sauconys started showing their miles with holes around the pinky toes on both shoes, and the tread was nearly gone. A general rule of thumb is once they start talking it’s time to say goodbye!

I couldn’t decide whether this was a pickup truck or dump truck…It sure is nice to have spring in full swing, finally!

In the words of the late Tom Petty, tomorrow we go “Into the Great Wide Open!”

6 thoughts on “The Twin Soos”