The walk out of Grand Rapids, Minnesota was filled with a handful of fun interactions that only added to the fond memories I will always have of the town.

I swung by KAXE Community Radio and did a 15 minute live interview, which was a little intimidating, but a ton of fun. I had to make sure I didn’t use any “road language,” because mine can get a little vulgar depending on the circumstances.

Across the street from the station, I visited with Eric (who had set up the interview), his wife Laura, co-worker Lara, and Eric’s sister, Katy. The group works at a CPA Firm their family owns and operates. I didn’t know accounting could be so fun, considering it was always my least favorite class in Business School.

The group introduced me to “Donut Diplomacy.” It is a regular tradition where they settle in-house squabbles or simply bond over a box of donuts. I had my first ever banana donut, which is a banana shaped donut with banana flavored frosting on top. Aparently they are a “thing” in Grand Rapids. Understandably so. It was delicious. We shared a lot of stories and a lot of laughs.

The “Donut Diplomacy” group. Thank you all for the great memories!

I left town around noon and began the three day, 70 mile trek to Bemijdi. The majority of the stretch passed through Leech Lake Indian Reservation and Chippewa National Forest. I camped next to a gas station in Ball Club, then stealth camped off a bike path outside Cass Lake the following night.

My favorite encounter on the reservation was with Chief Jay and his wife. We visited for 45 minutes. The Chief ended up giving me an eagle feather for good luck, a bouquet of plants that included sweet grass, sage, and cedar, and a hand-made leather pouch filled with tobacco. It is customary to spread a little tobacco on a piece of land as a gesture of appreciation. Chief Jay also broke off some pieces of the cedar, knelt down, and dropped them into my shoes to protect my feet. I was expecting the cedar needles to itch, but they didn’t. And my feet have been feeling great ever since! Thank you Chief Jay!

I arrived in Bemijdi on Sunday, June 24th, and already had a host lined up. Mike and Karen Forbes had agreed to put me up for the night after hearing about my walk when I arrived in Grand Rapids. And what a night we had! Mike made spaghetti for dinner and we visited around the table like old friends. The Forbes are an intriguing couple. They are both active in the outdoors and enjoy biking, camping, hiking, kayaking, and fishing (though I didn’t have much advice to offer on the kayaking or fishing fronts). The couple even lived in a teepee for two years, which is no small feat in Northern Minnesota!

They also have chickens and bees that live on the property. Karen asked me if I wanted to collect eggs for breakfast. I reluctantly agreed. I have a phobia of small spaces and domesticated/city birds, so I was nervous. It took five minutes longer than it should have, but I eventually made it into the chicken coop and retrieved six eggs while one rooster and seven hens watched me closely with their beady little eyes. Karen gave me a huge hug when I emerged, eggs in hand. She described the spectacle as “adorable.” I am glad no one else witnessed it. Karen also showed me her beehive and let me sample some “home grown honey.” I don’t have any issues with bees so when she opened the hive, I leaned in to take a closer look!

Mike, Karen, and their two dogs, Greta (right), and Reyna (left). Unfortunately our family had to put down our 13 year old black lab/sheperd mix, Tillman, a week before. It was nice to have some dog therapy. Both of their hounds are German Shepherds. Thank you for your hospitality, Mike and Karen!

After leaving Bemijdi I was four days and 115 miles from the North Dakota border. I always have a little pep in my step before reaching a state line.

50 miles west of Bemijdi, I emerged from the forest and arrived on the Minnesota prairie, complete with sugar beet farms, corn fields, and a few national wildlife refuges.

After walking through forested areas for the majority of my walk, being able to see 5, 10, or 15 miles into the distance was refreshing. I have always loved ths wide open spaces of the plains! After camping in city parks in McIntosh and Crookston, I began my final push to the Grand Forks, North Dakota area.

About 12 miles from town I anxiously watched a thunderstorm form on the horizon. There was only a 30 percent chance of rain that afternoon, so I played the odds when I left under sunny morning skies. The storm ahead grew and dark, menacing clouds closed in on me. I saw a sign for a rest area, two miles away, and started running. Five minutes into our clumsy run, a red pickup pulled over. “There is hail headed this way,” the man told me.

I joked in my Rapids radio interview that “PJ is not a jogger,” and “Why would I ruin a good walk by running?” In a scenario where hail is involved, PJ and I become avid runners. The ominous and sinister clouds swirled overhead. I eyed the small clump of trees that surrounded the rest area, in addition to a farm house that was a quarter mile south of the road. If it started raining or hailing, I would leave PJ on the roadside and make a mad dash for the house. Somehow, it never did. The storm missed us by a half-mile.

Looking back at the storm after it had safely passed. I could see the wall of water, and probably hail, a half-mile north of the road.

By the time we reached the rest stop it was obvious we were in the clear. I stopped, turned around, and was in awe of the spectacle I just witnessed. I dropped to my knees and prayed, right in the long grass off the road shoulder, thanking God for his protection. My whole body continued shaking for some time.

After the frightening thunderstorm debacle, I was anxious to get to Red River Recreation Area, where I planned on camping for the night. Unfortunately more severe storms were expected overnight.

It was a quiet night at the campground until 4 AM, when my phone started buzzing, alarming me of a severe thunderstorm warning for the area. I threw on my flip-flops and hustled to the campground shelter and waited out the storm. The alert said 60 mile per hour winds and hail up to an inch in diameter were possible with the storm. Hail that size would surely shred my tent and PJ. The storm pushed through town with an incredible lightning display, torrential rain, and wind, but no hail. I was grateful PJ lived to roll another day considering the weather of the previous 24 hours!

Within 20 minutes of resuming my walk on June 29th, we crossed the Red River and arrived in North Dakota, the eighth state/province of the trek. Minnesota had certainly gone out with a boom!

Beard today, gone tomorrow! I decided to ditch my beard at the Minnesota/North Dakota border. My face lettuce was getting too scraggly and hot, so I decided to start the second half of my walk with a clean look. It felt good to see my chin again!

PJ and I spent the morning wandering around downtown Grand Forks and the University of North Dakota’s campus. The UND Fighting Hawks (formerly known as the UND Fighting Sioux) have a gorgeous campus.

I really enjoyed the city. It reminded me of Fort Collins, Colorado, where I graduated from college. Massive trees lined the residential streets, it was very pedestrian and cyclist friendly, and had a very laid back, friendly vibe.

Despite a 4 PM departure from Wal-Mart on the west side of town, we managed to walk another 13 miles to Emerado, where I set up camp behind a gas station.

Our walk the folowing morning began just before 7. I hoped to arrive in Michigan, 39 miles down the road, by nightfall.

My first full day in North Dakota went relatively smoothly. I am expecting the wind to be my biggest opponent across the Peace Garden State. The terrain has been flat and there are very few trees, so there is nothing to stop the wind from howling!

Clear, big blue skies over beet, soybean, corn, and canola fields were around every corner. A surprising number of wetland areas off the highway provided habitats for migratory birds. It was nice to have consistent bird chirping to accompany sounds from the wind and passing cars. 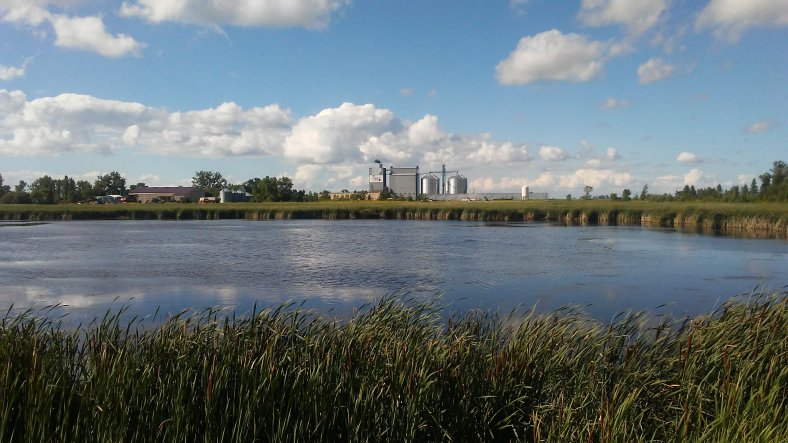 One of the roadside ponds near the tiny town of Petersburg, North Dakota.

PJ and I arrived in Michigan with daylight to spare, covering 39 miles in just over 13 hours. The walk from Grand Rapids to Michigan totaled 240 miles and took nine days.

We will be taking a rest day in the quiet and friendly town before continuing west to Devil’s Lake, Minot, and Williston druing our next walking stretch. 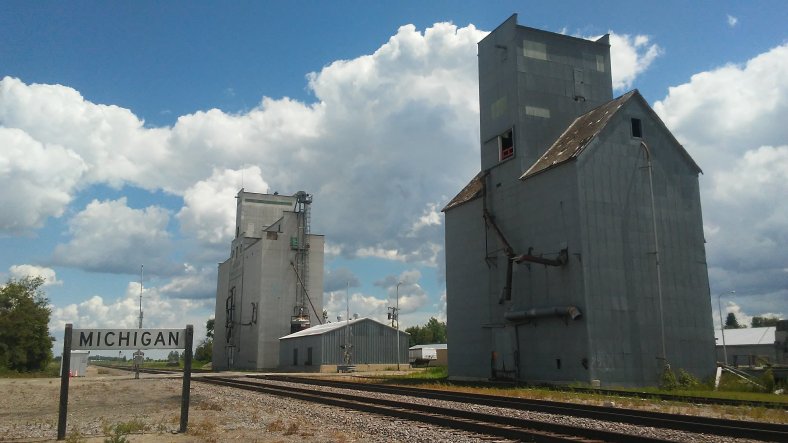 In total, I will have slept in Michigan for four nights during my walk! Two nights in Sault Ste. Marie, Michigan, and two nights in Michigan, North Dakota! I even have dinner plans with a friendly couple, Don and Laurie, who own the oldest house in town (built in 1901).

Favorite Roadside Find – A bungee cord. I found it between Grand Forks and Michigan. I was able to use it to bungee down my solar panel on top of PJ so it won’t blow back in my face when a semi-truck passes and sends a gust of wind my way.

Thunderheads and ominous skies to the east after these supercells passed just north of U.S. 2.

Polkadots in Grand Forks, North Dakota. This is high on the list of the most unique houses I have seen on my walk! I nicknamed her the Home of ‘Dipp’n Dots . 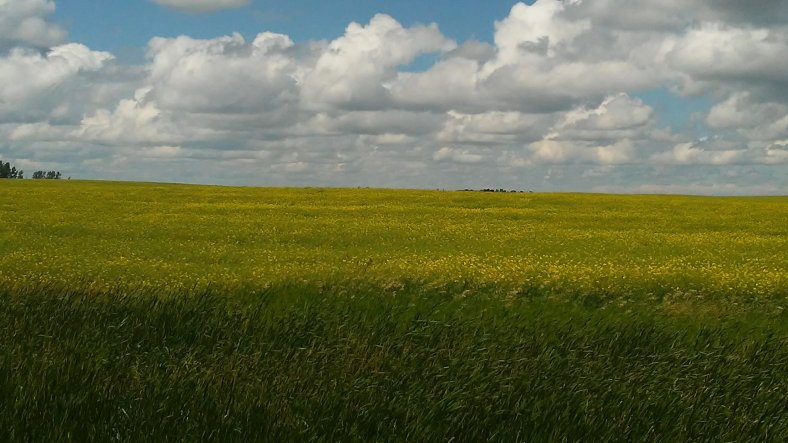 Yellow and green canola fields in the North Dakota countryside.

PJ has gone through his first pair of “shoes” on the walk (though I have still only disposed of one pair for myself)! I put fresh new tires on my buggy this morning.

We are ready to continue our windy two-step down U.S. 2! We will tackle any and all obstacles that are blown our way!

One thought on “So long ‘Sota…Hello Dakota!”